Double Mastectomy as a Preventative Measure for Breast Cancer??? 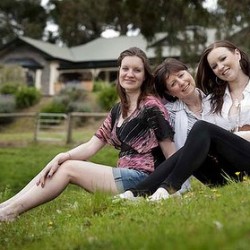 The following article was sent to us by Jody Spencer, one of our excellent contributors to the blog.  The article describes the choice made by two sisters in Australia to have a double mastectomy surgery as a preventative measure to guard against the possibility of contacting breast cancer in the future.  The family has a history of breast cancer, as both the mother and grandmother of the girls have had breast cancer in the past.

It is not my place to judge others.  The two daughters (Stacey age 24 who had a double mastectomy 2 years ago and Laura age 24 who will be undergoing the same procedure next month) have made the decision after careful consideration, and it is the right choice for them.  Given their family history, and the fact that both  daughters have been diagnosed as being positive for BRCA2, a gene mutation which causes breast cancer, their choice could be viewed as logical.

While I can understand the choice made by the young ladies, I have to wonder how much information they have been given about alternative strategies by their physicians and governments.   The surgeon that is mentioned in the article pointed out that stringent observance over time is chosen by about 90% of the women that are diagnosed with BRCA2.   What is not mentioned anywhere in the article is the fact that cancer can’t survive in an alkaline body.

If governments made the effort to educate the public about the importance and benefits of eating an alkaline diet and drinking alkaline water, its citizens would be much much much more healthy.  I’m not trying to single out Australia, as our governments here in North America are just as guilty.  We are finally beginning to see government advertisements creating awareness about obesity and diabetes, but there is much more work to be done.

The problem doesn’t stop with our governments.  Our physicians are bright, hard working people and they need to step up their education.  While doctors can educate themselves through reading about how to “live healthy”, it is really up to the medical schools to wake up and adjust their curriculum.  If our physicians were trained to focus their efforts on educating their patients about the importance of eating properly and staying active, our health care system would improve rapidly and permanently.  I digress…not unusual for me!

Normally, I edit articles down to save time, but the article is short and worth reading.  You can read it in its entirety below:

LAURA GADD is planning a party to say goodbye to her breasts.

The 22-year-old, who has a high genetic risk of developing breast cancer, will undergo a preventive double mastectomy next month to significantly reduce the risk of getting the disease.

Her older sister, 24-year-old Stacey, carries the same genetic fault and underwent the surgery two years ago.
They are believed to be the youngest sisters in Australia to undergo the procedure, which reduces the risk of developing breast cancer by about 95 per cent.

While the operation sounds radical, Adelaide-based university student Laura describes it as the obvious choice. Her grandmother and mother were both diagnosed with the disease in 1983 – her grandmother died four years later.

Her mother Laraine survived after having both breasts removed and numerous rounds of chemotherapy and radiotherapy.

“To me, this surgery was a no-brainer because of what mum went though – she was just so ill,” Laura said.

“So for me, it was a case of I can wait until I get sick or I can have this surgery and get on with my life.”

Laraine discovered in 1997 she had the BRCA2 gene mutation which causes breast cancer. The sisters were tested for the mutation when they turned 18 and both were positive.

“I was actually quite glad to find out because knowledge is power: I knew what I was dealing with,” Laura said.

She and Stacey are ambassadors for the website Pink Hope, which provides information and support for young women at high risk of getting breast and ovarian cancer.

Stacey, a Sydney-based marketing specialist, is thankful for the medical advancements which made testing and surgery an option.

“We don’t carry it as a curse. We don’t view it as a burden. We feel like we have been given the gift of knowledge,” she said.

Laraine, an anaesthetic nurse now 54, is also glad her daughters will not have to suffer as she did.

“Thank god they will never have to go through anything I have been through,” she said.

Stacey and Laura know that while they may have been spared that fate, they might pass the gene mutation to any future children.

IVF specialists are able to screen embryos for the BRCA1 and 2 genes before implantation to obviate the risk of the child becoming a carrier. About one in 500 women in the general population carry a mutation in the BRCA1 or 2 genes and approximately 10 per cent choose to have risk-reducing mastectomies.

A US study of almost 2500 women with the gene mutations found that women who opted for prophylactic mastectomies effectively eliminated their risk of breast cancer.

But Sydney reconstructive surgeon Dr Garry Buckland said deciding to have the surgery was not an easy choice.

“There are certainly girls who don’t want to have prophylactic surgery – they just want to opt for stringent surveillance,” he said.

“Then there are others who just want their breasts off so they can move on with their lives.

“Then there are women who change their minds. They initially go down the line of surveillance and then psychologically, coming up to their test each year or every six months, it becomes a huge issue in their lives and they no longer want to do it. They will opt for prophylactic surgery.”

As part of October Breast Cancer Awareness Month, the Cancer Institute NSW is urging women to be vigilant about screening. About 40 per cent of NSW women aged between 50 and 69 do not have their breasts screened as recommended every two years.

2 Responses to Double Mastectomy as a Preventative Measure for Breast Cancer???